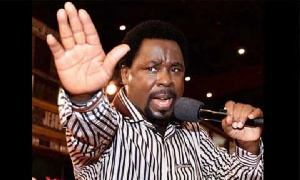 Popular Nigerian pastor, TB Joshua, has addressed his botched prophecy in which he claimed the Coronavirus pandemic would end on 27 March 2020.

The religious leader said the Holy Spirit gave him the prophecy that the pandemic would end on 27 March, The Daily Sun reports.

During an interview on his own TV, Emmanual TV, the preacher addressed his false prophecy and said he only did what the spirit asked him to do.

“I am not a politician, I just have to give you the message as the Spirit gave it to me,” he said.

“They know what they have done. Now innocent people are dying, especially the elderly. We can’t go near them because of fear and panic. Nothing is worth the blood of innocent people. There is no acceptable excuse for doing this,” said Joshua.

Meanwhile, Joshua has also claimed COVID-19 is a failure in advanced technology adding fuel to the COVID-19 5G conspiracy theories that have overtaken the world.

In February last year, Joshua for the first time prophesied to his congregation that there will be a time where there will be no church service and his followers will listen to his preaching through TV.

He said he could do nothing to stop it.