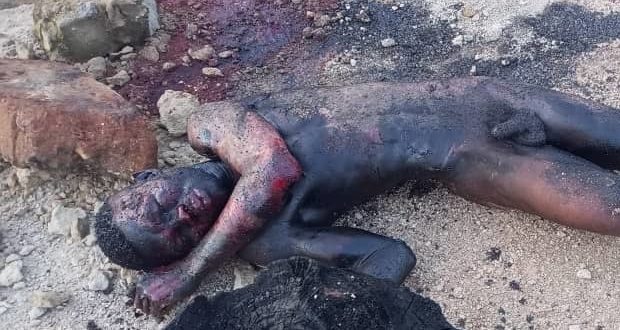 A man suspected to be thief has been lynched at Nkwantakese in the Afigya Kwabre North District of the Ashanti Region.

The deceased believe to be in his late 20s was reportedly beating to death after a failed robbery operation on Monday, November 28,2022.

The Assembly member of Nkwantakese Electoral Area Hon Opoku Kennedy has been narrating the incident to interview with OTEC News Kwame Agyenim Boateng:

“I received a call early Tuesday morning about the lifeless body of the deceased along a road in the community”.

“Upon geting to the scene, i was told that the yet to be identified man had engaged in a robbery operation in the area and was caught in the processs “

I was told some angry mob pounced on him around 11:p-m on the said day after he  sneaked  into a house to rob them”.

He however noted that, they could not identify those who killed the suspected thief.

Hon Kennedy described the act as inimical to the law governing the country and appealed the youth to shun taking  the laws into their hands and kill suspects in such an unlawful manner.

The body, he noted has been conveyed to hospital for further investigations.

Previous GERMANY, A STRATEGIC PARTNER FOR GHANA
Next Drivers who drive for more than 8hrs nonstop to pay over GH¢60k penalty – NRSA warns