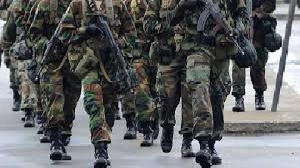 There is tension brewing within the military high command following the public humiliation suffered by a Senior Non-Commissioned Officer at the hands of suspected National Security Operatives in Tema last week.

According to a report by The Chronicle newspaper, a Senior Non-Commissioned Officer who was later identified as WO1 Mashud Salia was physically assaulted and handcuffed whilst in uniform over his inability to give way to a convoy of four vehicles.

The event, according to The Chronicle newspaper happened on the Tema-Akosombo highway at the Ashaiman Tulaku section.

The shocking incident which occurred on Wednesday, November 25 is said to have attracted a large crowd of commuters and motorists alike, who watched in disbelief as the soldier who is said to be a Physical Training Instructor (PTI) at the nearby First Battalion of Infantry was receiving slaps from the alleged National Security Operatives.

Narrating what occasioned the unfortunate incident, the Chronicle wrote “on Wednesday, November 25 at about 0830hrs, when traffic was heavy on the stretch, the soldier, Warrant Officer Class One ( W O 1) Mashud Salia, was driving his saloon car towards Michel Camp.

Upon negotiating the Ashaiman roundabout, a siren-blowing convoy of four high speeding vehicles approached from his rear, forcing their way through the middle of the tight traffic.”

The Chronicle further explained that according to eyewitnesses, “the WO attempted parking off the road to give way to the convoy, but the road was so narrow that his very life and that of other motorists was at stake, so he continued in the lane. Suddenly, the lead vehicle blocked that of the soldier, and armed men alighted from the other vehicles and started to slap him behind the steering wheel and afterwards pulled him out.”

The armed men who allegedly assaulted the soldier were described as wearing brown khakis and armed. They later handcuffed the soldier and shoved him into one of their vehicles and drove to Michel Camp and handed him over to the authorities there.

According to the Chronicle, the episode was/is generating so much tension that the authorities saw the need to address the situation before things escalate.

Thus, on Saturday morning, November 28, 2020, there was an emergency durbar at Michel Camp. The durbar was attended by the Deputy National Security Minister, Henry Quartey who was present, together with the Chief of Army Staff (COAS), Major General Thomas Oppong-Pepprah, and the top brass of the Ghana Army.

They pleaded with the soldiers to forgive and forget with the Deputy National Security Minister promising that appropriate sanctions will be meted out to those involved after ongoing investigations.

“He continued that the signal sent to the public was too bad, especially going into the elections.” The Chronicle newspaper stated.

“He then promised to sponsor this year’s West Africa Security Services Association (WASSA) of the IBN with rice, oil and assorted drinks, and enquired how many personnel would attend the recreational activity but there was dead silence.”