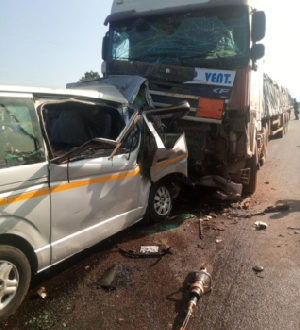 Suspect driver in custody after accident kills 12 in Central Region 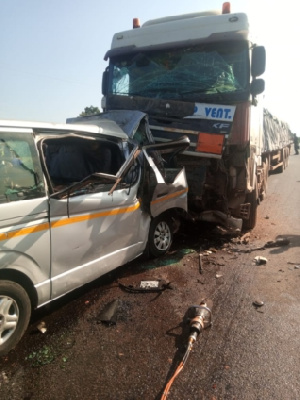 At least 12 persons were killed in an accident at Eduagyei on the Elmina -Komenda junction road in the Central Region, officials have confirmed.

The dead include 5 females and 7 males. Their bodies have been deposited at the Cape Coast Teaching Hospital Morgue for autopsy.

One person was injured in the accident.

The police have also confirmed the arrest of the driver of the DAF truck who “carelessly overtook some vehicles and collided” with the minibus.

“The driver (of the minibus) and 11 passengers onboard the Toyota Hiace vehicle have all been confirmed dead by a medical officer at the Cape Coast Teaching Hospital. One female passenger who survived the accident is responding to treatment at the same hospital”, the police said in its latest update on Facebook.

The police is working with the families of the deceased to assist in identifying the victims, the update indicated.