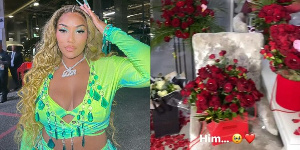 Stefflon Don, a British rapper and ex-girlfriend to Nigerian singer, Burna Boy, has shown off the romantic surprise she received from her new man as she adds another year today.

Recall that Burna Boy and Stefflon recently threw jabs at each other after the latter called him a “mummy’s boy” in one of her TikTok videos.

The rapper seems to have given love another chance, following her messy separation from her ex-lover, Burna Boy.

Stefflon took to her official instagram page to share a video of the surprise her man arranged for her which showed a bouquet of flowers and designer gifts.

The video was captioned: “Him”.

A while back, Stefflon Don, shared the hilarious voice note she received from a male fan on Instagram.

Speaking in a video shared on her official Instagram page, Stefflon said she receives weird and funny DMs from people all the time and decided to share the voice note with her followers.

In the voice note, the fan said he wanted to perform one of his songs for Stefflon and proceeded to give a rib-cracking performance which sounded like a failed audition for a singing competition.

The young man, who evidently lacks music talent, infused Stefflon’s name in the song where he talked about a ‘juicy’ and ‘cherry’ girl.