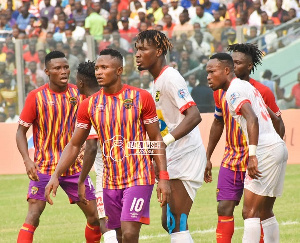 Credible reports gathered from highly placed sources within the Ghana FA and Sports Ministry indicate that the much anticipated Independence Anniversary clash between Kotoko vs Hearts of Oak in London, UK, is in doubt following an attempt by the Ministry of Youth and Sports to push the match to a latter date.

It has been gathered that, despite all arrangements for the London game perfectly in order awaiting visas, the ministry rather wants the two clubs to feature in an Independence Day match at the Baba Yara stadium in Kumasi to coincide with the country’s 64th anniversary celebrations.

It must be recalled that, the government of Ghana’s decision to rotate the annual independence celebrations has led to the Ashanti Regional capital being earmarked for this year’s celebration.

The Sports Ministry, therefore wants the two fierce rivals to clash in Kumasi instead, to climax the occasion.

This move could scuttle the plans to fly the two teams to the United Kingdom, in what could have been the first Super Clash outside the country.

Despite the Ghana Football Association and the two clubs overwhelming endorsement for the 7th March London clash at the Barnet Stadium, the latest development will leave a lot of fans disappointed.

The match, dubbed, the Clash in London, is being organised by Proball International Limited, a football agency in United Kingdom, in collaboration with Nana Yaw Amponsah and Justin Addo, two world acclaimed football managers

According to them, the encounter is, among things, intended to take the Kotoko/Hearts brand to the international arena.

Messrs Amponsah and Addo said a number of Ghanaians are residing in London, and so they deserve to watch Kotoko/Hearts clash live.

With mouth-watering prizes at stake, the organisers say the match will be watched by top European agents, offer a great exposure to the Ghanaian League as well as project the GFA’s highly commendable #BringBackTheLove campaign.

But with the latest development and intervention by the Sports Ministry, the future of the match is highly unclear