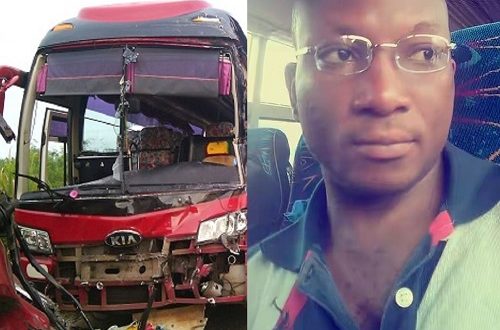 Speeding bus runs over policeman at duty checkpoint; driver on the run

A  speeding DAF bus with registration number GT 1089 F with 13 passengers onboard from Bolgatanga direction towards Tamale has crashed to death a policeman at a checkpoint at Savelugu in the Northern Region.

MyNewsGh.com gathered that incident occurred at about 12:30 am on Friday when the suspect driver on reaching a section of the road at Diare Police barrier along Bolgatanga-Tamale highway, was signaled with torchlights to stop about 50 metres away by the personnel on duty.

Police sources reveal that the deceased was on duty with his three other colleagues who had just finished checking a vehicle from Tamale direction.

The runaway suspect driver who was on top speed only stopped at about 100 metres away from the scene and bolted upon receipt of the information.

The Savelugu District night Patrol team led by DSP Emmanuel Twumasi- Ankrah quickly proceeded to the scene and found the body of the deceased badly mutilated beyond recognition.

The body of the deceased has been conveyed to the Tamale teaching hospital morgue for preservation awaiting autopsy whilst police are making frantic efforts to arrest the runaway suspect driver to assist in investigation.