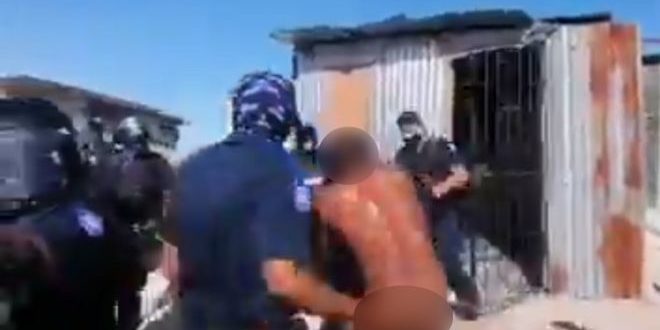 Four police officers in Cape Town are to be suspended after dragging a naked man from a house in an eviction caught on video.

Footage shows the man being thrown to the ground and stopped from re-entering the shack in Khayelitsha settlement.

When he manages to break free and run into the home made of corrugated iron, its front wall is ripped off leaving him exposed.

“We wish to condemn with the strongest terms an act which sought to degrade an individual like what we have witnessed,” she said, adding it “has no place in our democratic South Africa.”

In a statement on Wednesday evening, the city of Cape Town’s safety and security chief Richard Bosman said: “We are in the process of suspending four staff members involved in the incident, pending the outcome of the investigation.

“The suspension also ensures that staff are not targeted while on duty. We are saddened by the conduct depicted on the video footage, and we do not condone any forceful and dehumanising conduct by our staff members.”

Local media report that the part of Khayelitsha where the video was filmed is subject to an eviction order and has been earmarked for redevelopment.

Only 49 homes are allowed to “temporarily remain on the land until after the lockdown,” Mr Bosman said.

“After the removal of illegal structures, new attempts are made to invade again on a daily basis.”

South African law dictates that once a court order is secured, evictions “must be conducted in a humane manner” and in some instances, such as cases where the resident cannot find somewhere secure to live, “the state must provide temporary alternative accommodation”.