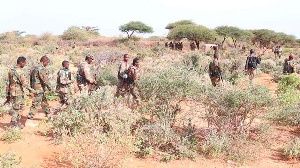 Somali forces on Monday seized a strategic town in the central regions of the country from Al-Shabaab, registering another milestone against the militants.

Adan Yabaal, a town located near the border between Hiran and Middle Shabelle regions that comprise Hirshabelle State, one of the five federal member states of the Federal Government of Somalia, had been a strategic location held by Al-Shabaab, the Al-Qaeda-linked extremist group.

The SNA said in a bulletin that it met no resistance from the normally feared Al-Shabaab fighters who left the town without posing resistance.

Out of fear from a possible fighting between the allied forces and the terrorists, most residents largely left the town, dreading being caught in a crossfire.

Al-Shabaab have lost most of the towns and settlements in Hirshabelle State, both Hiran and Middle Shabelle regions, after the SNA and Mo’awisley vigilantes waged offensive wars.

Mo’awisley vigilantes, who are mainly composed of nomadic herders, took up arms and rebelled against the jihadists’ confiscation of their livestock and illegal tax collection known as zakawaat,.

Over the last couple of weeks, the government forces and the vigilantes have been gradually inching towards the town which they seized on Monday. The town had been under the full control of Al-Shabaab for over a decade.