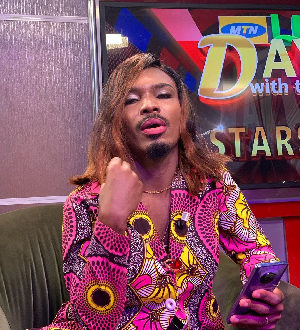 Time and time again, comedian Clemento Suarez has proven to be a naturally gifted copycat who is readily able to assume the character of every personality when it comes to acting.

He once again proved this point on New Year Day when he appeared on a segment during the UTV/Peace Fm Day with the Stars on Friday.

Appearing as the gorgeous host of United Showbiz, Nana Ama McBrown, Clemento Suarez together with other comedians re-enacted the episode of the show that saw comedian and actors, Lilwin and Funny Face engage in a brawl on live TV.

To assume the ideal character and look of Nana McBrown, he added a feminine touch to his dressing, and with his witty acting, he got social media praising him and expressing delight about his talent.

This will not be the first time Clement Ashiteye as he is personally referred to has earned praise for being a good mimic.

He has in the past had social media showering him with praise as he on several occasions mimicked the voice and mannerism of Ghana’s late former President, Flt. Lt. Jerry John Rawlings.