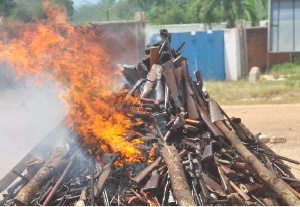 The National Commission on Small Arms and Light Weapons have destroyed a total 1,194 confiscated illicit weapons today, Thursday, 5 November 2020 at the Sekondi Prisons Park in the Western region.

These weapons were confiscated in the Western and Western North Regions only.

Speaking at a short ceremony prior to the incineration of these weapons, Executives Secretary for the Commission, Jones Borteye Applerh indicated that about 89.5 percent of these weapons seized were foreign-made, a situation he described as worrying.

He noted that the commission has taken an aggressive campaign to eradicate the possession of illicit weapons in the country, especially for the elections.

The Board Chair for the Commission, Rev. Prof. Paul Frimpong Manso charged that the nation can’t compromise on its peace.

He disclosed that Ghana ranks third in Africa on Global Peace Index, a position he noted should not be traded for anything less.

The Deputy Western Region Minister, Gifty Eugenia Kusi urged the public to commit to peace, as government does it bid to protect the citizenry.