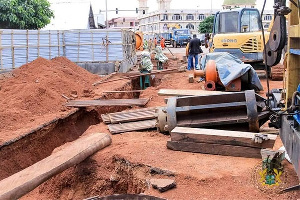 After nearly three months of work on the Tamale Interchange project, residents within the metropolis say they are being adversely affected by the construction.

From heavy vehicular traffic to low sales and patronage, the people of Tamale, the Northern Region capital, blame the lack of proper planning for the inconvenience they have had to endure, on the project.

President Akufo-Addo in April broke the grounds for the construction of the much talked about Tamale interchange. Construction works, would begin four months later.

Tamale is one of the fastest-growing cities in the country. With a rapidly growing population, the town has become the next business destination for many multinational and Ghanaian companies.

But the boost in commercial activity has increased pressure on the city’s infrastructure and also limited space. The construction of the tamale interchange was expected to ease traffic congestion and open up the city for growth. But after three months the people say the congestion has become worse.

While some motorists are willing to endure this for the duration, they believe the presence of personnel from the Motor Transport Traffic Department (MTTD) of the police service, could make things better, others also blame it on the slow pace of work.