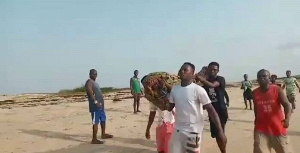 Rescuers are still making efforts to locate six children, three days after 20 of them drowned at the Apam beach in the Central Region.

A total of 14 bodies have been retrieved as of Wednesday, March 10, 2021, as authorities fear the death toll could rise.

Chiefs in the area, who believe it could be due to anger by their gods, have been offering libation and sacrifices for the sea to spit out the bodies.

Bereaved families have identified only six bodies with the dead aged between 14 and 17.

The Central Regional Public Relations Directorate confirmed to theghanareport.com that the bodies had been deposited at the St. Luke Catholic Hospital morgue.

The teenagers regularly troop to the beach to make merry on in an event described as ‘Sunday Special’.

Even though the programme was suspended due to COVID-19 restrictions, the children defied the orders.

The children were reported to have sneaked to go and swim on Sunday, March 7, a day after the country’s 64th Independence Anniversary celebrations.

The children used a different route to the beach, outwitting fishermen and other authorities.

The yearly ritual of drownings

Hundreds of deaths are recorded yearly due to drowning.

Every year there are reports of countless lives lost to drowning after revellers flock to beaches along coastal areas, especially on holidays such as Christmas, Easter, Independence Day and Republic Day.

At the Cape Coast Teaching Hospital, the biggest referral hospital in the Central Region, the leading cause of injury deaths were road traffic injuries (42.9%) and drowning (30%), according to research spearheaded by a Senior lecturer of surgery at the University of Cape Coast Dr Martin T. Morna.

The researchers used data from January 2012 to December 2018.

In the Greater Accra Region, the Ghana Police Hospital have issued cautions to the public in the past to be safety conscious after receiving bodies of people who got drowned at beaches close to the health facility.

The Pathology Department of the hospital recorded 68 persons drowning in 2017, with eight being females.

A total of 48 drowning cases had been recorded, 10 of them being females as of November 2018.