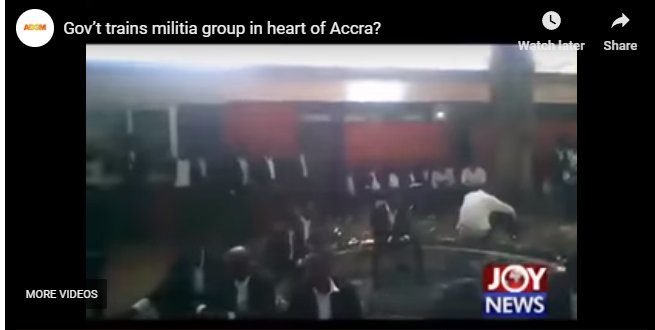 Shocking details of how Pro-NPP militia trains at Presidency Annex

Barely one hour from now, Ghana and the rest of the world will be led into the Multimedia Group’s Joy News Channel and some digital media platforms on the shocking revelation a pro-NPP melitia group that trains at the Presidency annex.

The video is a Joy News investigation that reveals have the backing of the government.

Make no mistake. This is not a state security agency. And this is not a private facility. This is the Christiansbourg Castle popularly called the Osu Castle in Accra. And this is a training ground and headquarters of De-Eye Group, a militia group affiliated to the governing NPP.

Until 2013, the Osu Castle was the seat of government. Currently it is an Annex to the Seat of Government, the Jubilee House.

But this is where the De-Eye Group, militia group affiliated with the NPP has been operating from in the past two years when this government took office.

The Commander of this group is Nana Wireko Addo, popularly known as ‘Choman’. The commander is former personal bodyguard of the President of Ghana, Nana Addo Dankwa Akufo-Addo.

Joy News investigations have revealed that the group has two offices at this state building as the secretariat of the Group and another as the office of the Commander.

The Ministry of the Interior, which licenses private security agencies has also said the group is not licensed to provide any security services. Sources within the group, however, say De-Eye Group undertakes security operations in and outside Accra.

A private legal practitioner, Martin Kpebu says it is an offence to operate a security group without any license from the Interior Ministry.

On December 7, 2018, the NPP held a ceremony at the Accra International Conference Centre to celebrate the legacy and launch a foundation of one of the founding fathers of the party, Simon Dombo. This programme was attended by almost everyone who matter in the NPP, including former President John Kufuor, Vice President Dr. Mahamudu Bawumia and his wife Samira. President Akufo-Addo was the special guest of honour.

Members of the group were informed of this event three days earlier. On the day, as on any other day, participants were not searched. Our investigation team was with the group the whole day and followed them to the Conference Centre. Members of the militia group who attended this event were about 400. Those who did not take part in the security served as audience.

Monday December 10, 2018, was the first meeting of the group after the Conference Centre event. That morning, Fraser Owireku Kegya, one of the leaders of De-Eye Group who is referred to as “Chief of Staff”, addressed member of the militia group. He told them President Akufo-Addo had asked about the group at the Conference Centre.

A Deputy Chief of Staff, Samuel Abu Jinapor told Joy News that, Nana Wireko Addo, aka, Choman, had indeed been Nana Akufo-Addo’s personal bodyguard, but the President does not know about the group. Mr. Jinapor also denied any knowledge of the Christiansborg Castle being used as a training ground for the group.

A research conducted as part of this investigation reveals this group existed before Akufo-Addo won power. In June 2012, a Daily Guide publication headlined, “Vigilante Group Vows to Protect Ballot” said De-Eye Group had been formed in 2009 by Choman, Nana Akufo-Addo’s personal bodyguard.

“The ‘Eye Vigilante’ group is made up of energetic male and female NPP members across the country whose primary target is to protect NPP members against any attacks by lawless people,” the report said.

In 2018, the Chief of Staff of the Group, Fraser Owireku Kegya, told TV3 in an interview that the group had a membership of over 5000 youth. Leaders of the Group say they facilitate the drafting of members of the group into the security agencies.

Both the Commander and Chief of Staff of the group have on different occasions warned members of the group against acts of lawlessness, but it appears some of them are often engaged in criminal acts and often have brushes with the law.

On another occasion, one of the trainers congratulated the group because that weekend, no member of the group was arrested by the police.

De-Eye Group is divided into four units – Alpha, Chalie, Delta, and the Special Unit. They meet on Mondays, Wednesdays and Fridays. Sometimes there are up to 400 of them in the Castle. They wear black suits and white shirts. It appears a number of top government officials and ministers in the Akufo-Addo government know about this group and its operations, but those we have contacted declined comment on the matter.

The Group’s weekly activities in the Christiansborg Castle are open, often between 7 and 12 noon and they go there in hundreds. At their last meeting in 2018, they held a party deep into the night.

Apart from using the park of the Christiansborg Castle for training, De-Eye Group and its leader have two offices in this important state building. The question is who gave them this building? And who at the top intervened, when the National Security ministry drove them out of the Castle?