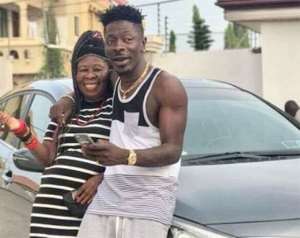 ELSIE AVEMEGAH, the mother of Shatta Wale, has said her son does not have any right to stop her from marrying actor Kofi Adjorlolo.

According to her, it is none of Shatta’s business whom she decides to marry.

The comment follows growing concerns about whether Shatta Wale will allow his mother to get married to anyone in showbiz after several reports which suggest his mother is set to marry Kofi Adjorlolo.

The woman, who has become known as Shatta Mama, has been trending this whole week over reports of the alleged upcoming marriage.

Kofi Adjorlolo refused to talk to DAILY GUIDE about the marriage claim when this paper contacted him, but Shatta Mama has been quoted on different platforms as allegedly confirming their relationship.

Speaking through her publicists, Reagan Mends, Shatta Mama said, “Wale won’t be a problem because he can’t do anything.”

“Yes, ever since the news went viral, people are asking whether Shatta Wale would allow his mother to marry Kofi Adjorlolo. Well, I spoke to her (Shatta Mama) this morning, and she told me that no one can prevent her from marrying anyone of her choice,” Reagan indicated.

“She said why would Shatta Wale dictate to her on whom to marry? He can’t prevent her from marrying Adjorlolo because he (Shatta Wale) doesn’t take care of her; he doesn’t even know where she lives, so why would he even intrude her affairs,” he added.

Adjorlolo and Shatta Mama have become a topic for discussion and fingers are crossed in anticipation of their marriage.

Adjorlolo has two children with his late wife, Charity Nyarko, who died in 2011. Shatta Mama on the other hand has three children.

Previous Some Basic schools shut down due to teachers strike
Next Kwasi Kwarteng: The Conservative MP tipped to succeed Boris Johnson