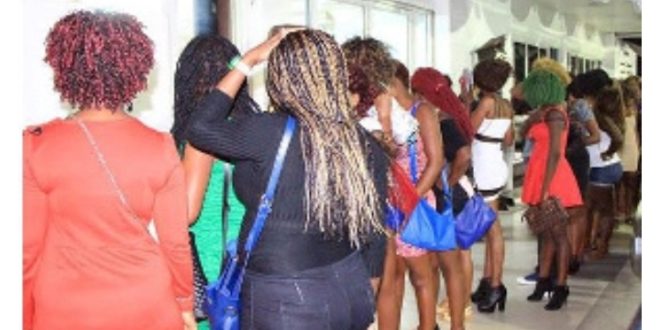 Govt should do something about the economy – Sex workers

Commercial sex workers in Accra have readjusted their charges as a result of prevailing economic hardships in the country.

According to a report by JoyNews, this means that the longer time a person spends with these women, the more charges they’ll pay.

While sex may be a deep expression of emotions, some of these commercial sex workers said that it has become necessary that they also adjust their charges to serve their clients, while reducing any shortchanges.

“A friend of mine introduced me to a lady; she’s in Ghana here. The lady called me on phone and we kept on talking and then she asked me to come to Ghana to come and do a business with her, serving her for an amount.

“I started having problems with my madam because things were not going as planned and I wasn’t getting her money for her,” one of the girls, who gave her name as Becky, told the channel.

She further explained that things used to be relatively way better for her a few months ago than they are presently but it all largely depends on the clients they are lucky to bump into.

“Sometimes, in a day, I get GH¢1000 and sometimes GH¢800 because those were days I had my customers who paid me well but I lost those contacts and things have been hard for me since then.

“It [sometimes] depends on the man you meet. There are some who come and say all they have is GH¢50 or GH¢100 but depending on who it is, we start from GH¢200 or GH¢300 and that depends on how you keep yourself: if you keep yourself well, better men will come for you and pay you well.

“If you start with small amount with them, they will always come with the same thing,” she added.

Another commercial worker, Vivian, whose three years on the streets makes her a professional, said she charges accordingly.

“I take GH¢200 for a short period (that’s 10 minutes)… in December, things were cool but since January, things have become difficult. I wasn’t getting a lot of customers but those I got were paying good. There’s been increase in good lately and to pay my rent is difficult and because of that, I’ve increased my price and that’s chasing my clients away. I won’t reduce my price either because I pay rent, I buy food which is also very expensive, I clothe myself and so I can’t reduce my charge,” she said.

The girls have however added their voices to the calls for the government to do something about the economic challenges being experienced in the country.

They may be sex workers but they are not vulnerable because there is always someone tailing their movement on the street, the report added.

Some of these girls, the report continued, are migrant sex workers from countries like Nigeria and Liberia, with some being as young as 16-years-old.

Previous VIDEO: Man arrested for contracting robbers to attack his father who has returned from abroad
Next The teenage mum who defied the odds to go back to school after pregnancy