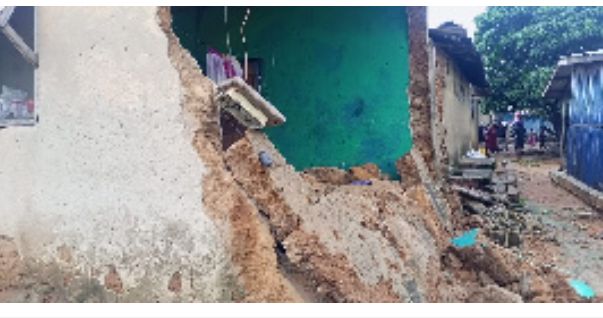 Share
Heavy rains in parts of the Sekyere South District of the Ashanti Region caused the collapse of a building, killing two children and injuring five others.

The dilapidated structure located at Bepoase was home to a family of seven, including a pregnant teenager.

An official with the National Disaster Management Organization in the Sekyere South District, George Akwasi Gyempeh who confirmed the incident to dailymailgh.com said the deceased are females aged 12 and 14.

“It happened last Friday, around 11 p.m. Bepoase is an old settlement with weak buildings. And the victims were in one of such structures live a woman in her 50s and six others including a pregnant teenager. One person died on the spot but another had been referred to the Komfo Anokye Teaching Hospital but I got information that she was also confirmed dead”, Gyempeh told dailymailgh.com.

Two other victims are being monitored at the hospital while three others have been discharged. Mr. Gyempeh wants weak structures in that community demolished.

“The risk of secondary collapse can’t be ruled out [with the onset of the rains]. We have been telling residents in such structures to relocate or demolish their buildings to avoid such disasters,” he said.