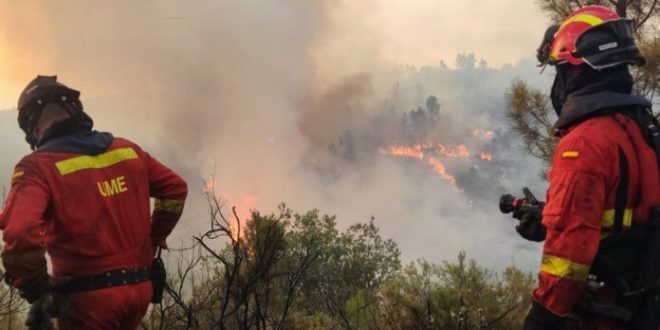 Residents and holidaymakers have fled towns and villages in France as fires are whipped up by high winds and tinder-dry conditions in several countries in Europe.

More than 10,000 people have been forced to leave the south-western Gironde region in the past few days.

Dozens of fires are burning in Portugal and Spain where temperatures have surged above 40C.

At least 281 deaths in the two countries were linked to the heatwave.

Several towns in western Spain have been evacuated.

The head of France’s firefighters’ federation has warned of the impact global warming is having on civil protection. “It’s firefighters, civil security who deal with the effects on a daily basis – and these effects aren’t in 2030, they’re right now,” said Grégory Allione.

Heatwaves have become more frequent, more intense, and last longer because of human-induced climate change. The world has already warmed by about 1.1C since the industrial era began and temperatures will keep rising unless governments around the world make steep cuts to emissions.

Firefighters in Spain fought to protect the town of Monsagro as fires erupted further south in the Monfragüe national park, home to rare species of birds. The main N-5 route in Cáceres just east of the park was cut off when a forest fire reached the road.

Temperatures were set to top 40C in large areas of western Spain as well as Portugal on Friday. At Pinhão in the north, 47C was recorded on Thursday, a record high for July in mainland Portugal.

However, forecasters in Spain said temperatures would begin to fall on Friday.

The Carlos III Health Institute said on Thursday that at least 43 people had died during the first two days of the latest heatwave, on Sunday and Monday, because of the heat.

Health officials in Portugal recorded 238 deaths more than normal since 7 July which they attributed to the very hot and very dry conditions. The worst affected are the elderly, children and people with chronic diseases.

More than 30 fires were active in Portugal on Friday morning, including one in a forest at Pombal in the central region of Leiria which has lasted a week. More than 300 sq km have been torched this year, a bigger area than in all of 2021.

Police in south-west France went from door to door in an effort to evacuate 4,000 residents from the Cazaux district south-west of Bordeaux. Smoke could be seen close to the town of La Teste-de-Buch and there were long queues of traffic as people tried to leave and police blocked entrances to stop drivers getting in.

One holidaymaker, Matthias, told BFMTV how he and his son had been told to escape immediately: “We started packing our things but the lady told us, no, you have to leave everything as it is. You try to keep calm but it’s hard not to be scared because it happens so fast.”

An estimated 73 sq km of pine forest has burned down in recent days, including around Arcachon and Landiras. Temperatures are set to reach 40C in some areas and the head of the national firefighters’ federation warned there were still two months of summer to go.

“The situation is highly complex. Our morale is still good but fatigue sets in fast. That’s why we’re calling for a target of 250,000 volunteer firefighters,” Mr Allione told RMC TV.

Italy and Croatia have also reported forest fires this week, and strong winds have greatly increased the risk of wildfires in five regions in Greece, civil protection officials have warned.

Central Greece, Attica and Create are among the areas most at risk and officials have appealed to Greeks not to do anything that could spark a fire.

Fires were reported in Crete and on the mainland in Attica on Friday. Emergency services issued an urgent appeal to residents south-east of Athens to flee the village of Feriza Saronikos for the coast.

Across the Strait of Gibraltar from Spain, toxic wildfires have also been ripping through parts of Morocco.