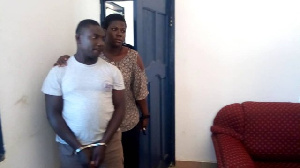 The 34-year-old former Sawla SHS mathematics teacher, Ernest Ocloo, is to appear before the Tamale High Court today, Monday, March 16, 2020, after being charged with rape by the Bole Magistrate Court.

Details of the writ between the ‘Republic versus Ernest Ocloo’ indicate that the suspect committed the offence contrary to section 97 of the Criminal Offence Act, 1960 (Act 29).

The facts of the case, however, states that the teacher, on or about November 12, 2019, had carnal knowledge with a second-year female student (18 years) without her consent, at the schools’ staff common room.

The female students according to the case revealed moved from her parent’s house at Sawla to live with Mr Ocloo at his residence during a recent mid-term break.

School authorities, however, claim at the time the student moved to the residence of the teacher, she was under the supervision of her parents and not the school.

The maths teacher, Ernest Ocloo, has since been dismissed by the Ghana Education Service (GES).

Prof. Kwasi Opoku-Amankwa, the Director-General of the Ghana Education Service (GES), in the sack letter copied the sector Minister, Dr. Matthew Opoku Prempeh stated, “Ernest Ocloo has been involved in sexual misconduct with several female students of Sawla Senior High School. He admitted to having sexual intercourse with a female student in the staff common room…”

The letter added, “It is the expectation of Management that this will act as a deterrence to all staff of the Ghana Education Service (GES) that such conduct will not be countenanced.”