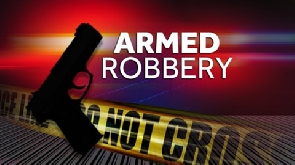 A gun battle between the Sawla-Tuna-Kalba District Police and Armed Robbers took place in the early hours of today at a Community on the Sawla to Tuna called Gbongboduori resulting in the shooting of one of the Armed Robbers.

Speaking to Bole based Nkilgi Fm today 23rd May, 2020 on their Saturday’s “Aboya Tushiso” (Hot Issues), with Dauda Braimah Jebisco, the Sawla-Tuna-Kalba District Police Commander ASP Degraft Armah Agyei said at 2:00 am today’s dawn, some of his men were on passenger escort from Sawla to Tuna but some suspected Armed Robbers appeared from the bush and started firing sporadically but never knew police were in the bus with the passengers.

He said the Armed Robbers numbering about 4 also fired at the bus and fortunately no one was injured.

The Police Commander explained that his men fired back resulting in the Armed Robbers retreating but they were chased and one of them apprehended. He said the one caught was shot in the thigh during the chase and grabbed with his gun and bullets. The rest of the Armed Robbers fled into the bush.

“Currently the suspect is receiving treatment under security and will be dealt with according to the law”; DSP Degraft Armarh Agyei said to Nkilgi Fm.

DSP also added, “Initially we were only escorting the long vehicles and got to realized that the people started robbing the mini vehicles so we then started escorting those ones too… So the never knew the police are now escorting the smaller vehicles too and that is why the shot at it; he said adding; “They wouldn’t have even venture if they knew police were in that car”.

The name of the suspect believed to be if Fulani extraction was given as Musah Yakubu who and a resident of Tuna.

Many in the area have commended the Sawla Police for their bravery in handling these Armed Robbers who have been terrorising them.