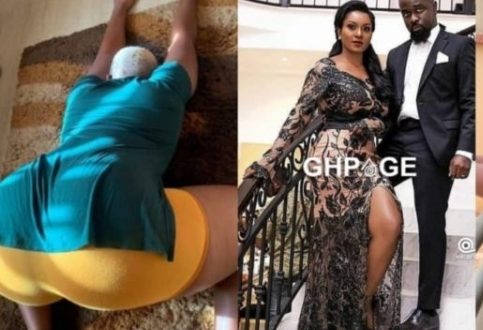 Sarkodie’s fans have issued a strong warning to Abena Korkor ahead of her next possible chopping list.

According to these worried fans, it’s evident Abena Korkor might include Sarkodie’s name in her the next episode of her chopping saga hence it’s better to warn her before she does the unthinkable.

This follows after Abena Korkor accused Stonebwoy, Asamoah Gyan, Stephen Appiah of sleeping with her and later rendering an unqualified apology to them on the internet.

Currently, Abena Korkor has accused almost 90% of the male celebrities and politicians of sleeping with her so this warning from Sarkodie‘s fans is very crucial.

This warning was given to her under a tweet she shared on the microblogging platform in which she attributed her consistent and nauseating nonsense to her bipolar disorder.

In her apology message she wrote;

“I render a general apology to all men and women whose image I have tarnished by dragging our private business to the limelight. I will not attribute all my actions to bipolar disorder. I am seriously dealing with some mistakes I made in the pasts and my childhood trauma.“

Below are some of the warnings from Sarkodie’s fans gathered under the tweet;

@Eagleeyez7 – OK, just make sure you mention Sarkodie’s name in your next list.

@Thebilljor – Sister Fri y3 so wati….. Mtcheeeeew…. Ghana here everybody mad oooo.. We all get problems but we just don’t bring it out. Gyimiii saaaa then you come apologise. You don’t stop, your time go come. You think most people don’t have trauma in the past ehhhh.. Continue..

@Egoehp – She started this in University of Cape Coast ooo. I know this lady cos we were in the same Hostel…SRC Hostel and her level of fooling errrr… This nonsense needs to stopSome people are going through bigger things than this but why always you… Gbetormenyo

We hope Abena Korkor behaves herself for once and for all this time around!

Previous EXPLAINER: Is it better to buy a house or rent?
Next WWE star Razor Ramon dead