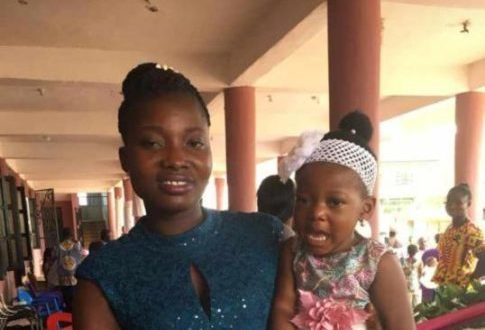 Belonia Adusei, the three-year-old girl who was knifed during a robbery incident at Hemang/Ampatia in Kumasi has also died.

Her death comes barely two weeks after her pregnant mother, Juliana Adusei, 31, was killed in the attack.

The little girl was declared dead on Wednesday, at the Komfo Anokye Teaching Hospital (KATH) where she was being treated for stab wounds inflicted on her by the robbers.

A family member, Adwoa Afriyie, who confirmed the development on Thursday said that she had undergone multiple surgeries in an effort by doctors to save her life.

“It’s devastating news,” Afriyie said. “The immediate family has been wiped out. We thought she would survive but it didn’t happen,” she added.

Police at Suntreso District, which is investigating the case, are appealing to residents in the area to volunteer information as a serious search for the three-member gang begins.

Surviving victim and husband, Pastor Francis Adusei, had told the police that the armed men invaded their home while he was asleep together with his wife and his three-year-old daughter on that fateful day.

Residents, who are living in fear, have launched a desperate appeal to the Inspector General of Police to make an abandoned police station operational.

“It appears our security can’t be guaranteed. The community has built a police station in this town but personnel are yet to be deployed to man it, and so as you can see it has been taken over by weeds and reptiles. We pray that one day this project will serve its purpose,” Assemblyman for the area, James Sarfo said.