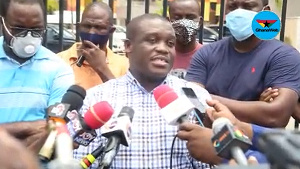 ember of Parliament (MP) for Ningo-Prampram, Sam Nartey George, has made a subtle alleging that Samini and Sarkodie were given hefty sums to campaign for the ruling New Patriotic Party (NPP).

According to him, Ghanaians shouldn’t be swayed by their endorsement which he described as a funny one.

The MP explained that though the top musicians have cemented their names with regards to their music craft, their political choices cannot be trusted.

Don’t be swayed by any funny endorsements people. We may love their music and groove to it but we don’t trust their political choices, especially when they are worth GH500,000, he said on Facebook.

Sarkodie and Samini have both released songs to throw their support behind the incumbent NPP.

According to them, they believe in their ideologies compared to past presidents who have had the chance to govern the country.