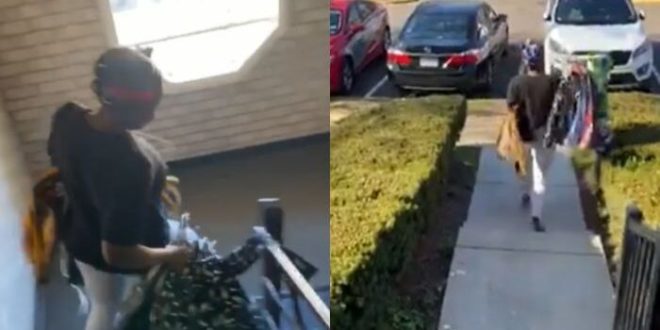 SAD VIDEO: US-based Ghanaian man stranded after his wife sacks him from their Apartment

Viral footage spotted by our outfit shows the moment a Ghanaian lady in the U.S sacked her husband from the house because she had paid their rent for two consecutive months.

The lady was reportedly angry at her husband that he could not pay the rent for two straight months and she had to be paying it.

Consequently, she gathered his clothes and threw him out of the apartment they shared.

The man could not believe his eyes as he complained that this is what he has been reduced to just because he couldn’t pay rent for a couple of months.

The estranged broke husband, therefore, told his wife that if she’s sacking him from the house then she should keep the kids and take care of them.

Previous Man Threatens To Shoot Another Man For Constantly Sleeping With His Wife
Next VIDEO: How Rawlings earned the heart of Anlos