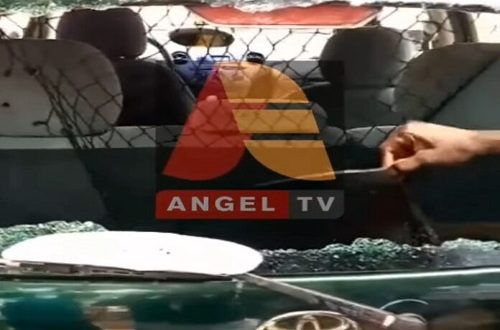 A video has been sighted at Angel FM’s Instagram handle showing one Taxi Driver, name withheld who has been shot dead at Amasaman.

Information that is surrounding the story is very scanty but according to commentary in the video, the taxi driver was shot in the head and immediately died. What could actually trigger the workers to shoot someone who is not harmless to death.

According to video and commentary, the taxi with the registration number GR 3847-21 was tolled to the police station. The Forestry workers told the police that, the driver had an accident with the car and died but there wasn’t any scratch or dent found around the car that shows it truly had an accident.

All you could see is the back glass which has broken. Per the information that was given, these workers shot through the back and the bullet hit the head. He died instantly and his remains have since been deposited at the morgue.

They also made mention that, the bullet passed through the glass and the seat and entered the head which caused the brain matter to split all over the car. They put the camera on the residue of the brain matter which were scattered in the interior of the car with blood. The main reason what caused the shooting isn’t known but it is very sad for such thing to happen. May his soul rest in peace.