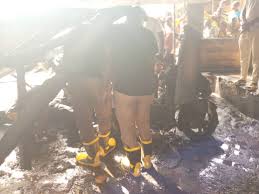 A 10-room-self-contained flat at Tamanja, a suburb of Yeji in the Pru East District in the Bono East Region has been razed down by raging fire.

According to reports, the fire, which started around 5:30pm Sunday, destroyed several property in the house.

The fire nearly trapped a woman who gave birth five days in a her room but for her neighbour who woke her up.

One of the victims of the fire said although he tried to rescue his items the inferno scared him off.

“I quickly disconnected the power to prevent the fire from spreading and called fire service,” he stated.

Meanwhile, DO2 Suleiman Abdulai, who led a team of fire service personnel to put out the fire, in an interview with Adom News’ Daniel Tachie said the incident could have been avoided.

He indicated that their timely intervention prevented the fire from spreading to other houses.

DO2 Abdulai suspects the fire was started when someone tried to prepare a meal with a faulty LPG cylinder.

Play attached video above for more: