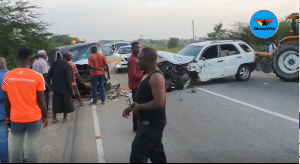 Several passengers have been left with various degrees of injuries after three cars collided in a near-fatal accident on the Kasoa-Winneba highway in the Central Region Tuesday morning.

According to an eyewitness account, the incident occurred after a 4×4 vehicle enroute Accra from Kasoa tried overtaking another salon car on the highway and ran into an oncoming mini-bus from Accra going to Winneba.

The third vehicle; a salon car, which tried to pave way for the 4×4 to overtake ended up somersaulting and veering into a nearby ditch, injuring the driver in the process.

At the time of reporting, there was heavy vehicular traffic as both cars; the 4×4 and the mini-bus had blocked both sides of the road. Police personnel were however at the scene, trying to control the situation and tow the cars off the road.

The front part of the vehicles were badly damaged and there was blood all over the area.
One person is reported to be battling for their life at the hospital and the others who were seriously injured were also receiving treatment.

Below is a video of the event