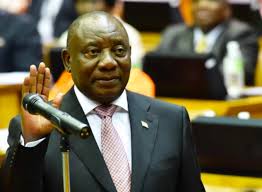 The ANC congratulated its leader Cyril Ramaphosa on being inaugurated as president of the country on Saturday.

“We are humbled by the confidence that the people of South Africa, from all walks of life, have shown in his leadership,” said ANC spokesperson Pule Mabe.

He said they were confident Ramaphosa would uphold his oath of office.

“Like the generation of ANC leaders that came before him, we are certain that Cde Ramaphosa will continue to serve the people of South Africa with dignity, integrity and selflessness,” said Mabe.

President Cyril Ramaphosa took to the pitch at Loftus Versfeld after his official Inauguration ceremony and jived with a group of singers and dancers.

“His inauguration today must truly represent the dawn of a new era. Indeed, South Africa stands on the threshold of a promising era of effective and efficient government, service delivery, inclusive growth as well as clean and corruption-free governance.”

The ANC believed Ramaphosa had the capacity and commitment to lead South Africa in the fight against poverty, unemployment and inequality.

Support of the DA

“If the President does what is in the interest of South Africa and is genuine about economic reform, he will have the full support of the DA.”

Maimane wanted to see a slimmed down cabinet with strategic changes.

One of his suggestions was to reduce the economic cluster to three key ministries – finance, state-owned entities and jobs – to enable “more coherent economic policy”.

“President Ramaphosa needs to use the opportunity to be honest with the nation about and explain to people why populist solutions, no matter how attractive they may appear, will ultimately lead to South Africa’s downfall, as they have done in Zimbabwe, Venezuela and elsewhere,” said Maimane.

He believed Ramaphosa should convene a race and reconciliation summit to work towards a shared future.

“President Ramaphosa will have my full support when he prioritises the national interest over his party’s interest. Beginning with these reforms would be a huge step in the right direction. We wish the president well.”