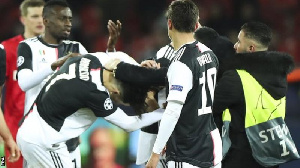 Cristiano Ronaldo reacted angrily after he was grabbed by a pitch invader at the end of Juventus’ 2-0 win at Bayer Leverkusen on Wednesday.

The Portuguese, 34, gave Juventus the lead in the 75th minute with his 128th Champions League goal, before Gonzalo Higuain added a second late on.

After the final whistle, a fan ran on to the pitch and put his arm around Ronaldo as he tried to get a selfie.

Ronaldo pushed the fan away before security staff intervened.

The five-time Ballon d’Or winner, who held his neck after the incident, had hugged another fan who came on to the pitch during the match.

Juventus had already qualified for the last 16 as group winners.

It was Ronaldo’s third goal in as many games and his ninth of the season.

“I feel good – the annoyance I felt has passed and the team is in good shape,” he said after the game.

“Today we played a good second half. We are all growing and even I personally felt better today, more confident, and I hope to continue like this.”