Robbers engage police in a shootout; abandon booty and arms 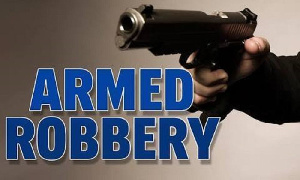 Four(4) suspected armed robbers have attacked and robbed some residents of Kusanaba in the Bawku West District of the Upper East Region, MyNewsGh.com reports.

The suspects according to the Zebilla Police, attacked their victims at the Kusanaba Forest and made away with various sums of money.

According to the facts of the incident available to this website, one of the victims claimed he was riding his Tricycle from Kusanaba forest to Binaba but on reaching a section of the road in the said forest, four men, one armed with AK 47 assault rifle and three others holding machetes attacked and made away with his two gallons of petrol valued at GHc700.00 and cash sum of Ghc200.00.

A terrified victim stated that his Infinix note 10 and cash, the sum of Ghc2.00 were taken from him while another stated that the robbers made away with his Cash the sum of Ghc4600.00, Techno camon 19, Android mobile phone valued at Ghc 2600.00.

The third victim identified as Salifu Amadu stated that, he was riding on his motorcycle with Osman Amadu as pillion rider from the Kusanaba forest to Binaba when they were suddenly attacked taken to the forest and robbed. He added that he can identify one of the robbers when seen.

Police upon receipt of a distress call, rushed to the scene and combed through the forest and encountered the robbers at the bank of the Black Volta.

The armed robbers on seeing the two armed policemen, started firing at them

Previous Ghanaian jailed 10 years in Dubai for trafficking weed
Next Baba Armando ‘wanted’ for allegedly scamming a woman of GHC450,000