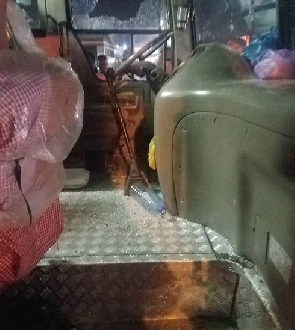 One person was raped Monday dawn when a group of robbers attacked a Bawku bound bus about 500 metres from Nasia.

According to an eye witness who was on board the bus, police officers who were stationed at a barrier about 5minutes away from the robbery scene failed to come to their aid.

The eye witness who only wants to be known as Muntaka said the bus left Krofrom in the Ashanti region around 4pm Sunday and made a few stops along the way.

He noted that the bus arrived at Tamale 8 hours after it set off at 12:00 am. About an hour and half after that, Muntaka explained, he was startled out of sleep by a loud noise which he later learnt were gunshots.

He narrated how some gun-wielding men from the bush started shooting towards the bus which had slowed down because of a cargo truck parked in the middle of the road.

The cargo truck, Muntaka later found out, belonged to a driver who had been taken hostage by the armed men and forced to pack his truck in the middle of the road with barriers in front to create the impression that it was a broken down vehicle.

The driver of the KIA bus with the number; AC 1557-17 abandoned the driving seat and bolted for the back of the bus out of fear after a bullet from one of the guns hit his side but luckily missed him.

The owner of the bus, who was also on board, seated directly next to the driver then took over, stopped the ignition and opened the doors of the bus to avoid any more shooting.

At this point he recounted, the robbers had surrounded the bus whilst one boarded and gave orders.

“One robber wielding a machete entered the bus and started chanting. He ordered us to come down one after the other for a search,” he said.

Everyone on the bus was searched upon coming down from the bus and their valuables taken away from them.

One woman’s misery went further when some of the robbers took her into the forest and brutally raped her. The unfortunate incident got the woman devastated; she practically wailed for the rest of the journey after the bus took off again till she got off at Bolgatanga.

The robbers per his account also stopped an approaching Yutong after getting their ‘booty’ from the passengers on his bus but bolted when they realized more vehicles were approaching.

All passengers got back onboard and the bus took off again only for them to meet a real police barrier less than 5minutes away from the crime scene.

He said the police provoked the anger of the passengers when they apologized for not coming to their aid even though they heard the gunshots sounds.