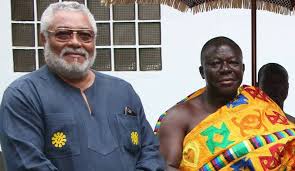 Rawlings did not hate Kufuor – Otumfuo

The Asantehene, Otumfuo Osei Tutu has said that the relationship between former presidents, John Agyekum Kufuor and Jerry John Rawlings was not as acrimonious as reported in the media space.

It is well established that the two statesmen did not enjoy the best of relationships when Rawlings who passed on the mantle to Kufuor after 19 years of reign was alive.

On multiple occasions, the two former presidents clashed in the public space with strong-worded statement usually issued from both camps.

But Otumfuo says that it will be a bit of an exaggeration for one to use hatred to describe the relationship between them.

Otumfuo divulged that there were differences between the two ex-presidents but they ironed it out.

“Rawlings did not hate Kufuor. There was a time that myself, Kufuor and Rawlings rode in the same car. On a few occasions that there were some slight differences between Kufuor and Rawlings, the three of us resolved it peacefully”, Otumfuo is quoted to have said by DailyGuide.

Otumfuo made these comments when the family of the late president visited him at the Manhyia Palace to inform him of his death.

The Asantehene paid glowing tributes to Rawlings and praised him for always heeding to his advice.

“I worked closely with Mr Rawlings when he was the President. In fact, he was noted for always consulting me for advice on crucial national issues and that was a sign of a leader that respected tradition and culture,” he said.

Otumfuo also added, “After he left political office, whenever he had issues with either President Kufuor or late President Mills, immediately I called him to let sleeping dogs lie to ensure peace, Rawlings would instantly listen.”

The Asantehene also called on the parties involved in the organization of the funeral for Rawlings to unite and give him a befitting farewell.

“There shouldn’t be any confusion in his absence, we should all unite and give him a peaceful and befitting burial and funeral rites that he truly deserves after his significant services for the state,” Otumfuo advised.