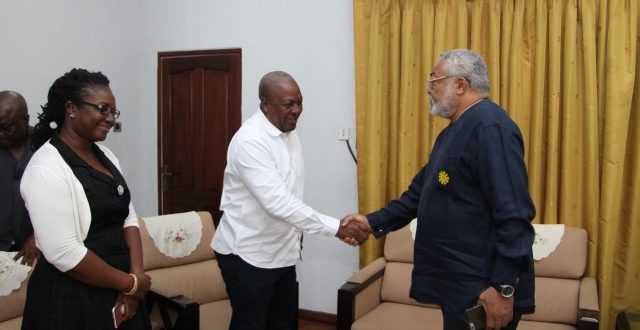 Former president Jerry John Rawlings, founder of the main opposition National Democratic Congress (NDC), has congratulated former president John Mahama on his election as the flag bearer of the party at Saturday’s primary.“My congratulations to former President J. D. Mahama on his election as the presidential candidate of the NDC.“My congratulations also go to all the other candidates for the dignified manner they conducted themselves throughout the process and for accepting the results in a mature and good-natured manner.“While congratulating ourselves as a party for a relatively smooth process, we have to remember that this is only the first step of the task to convince the larger Ghanaian electorate”, Mr Rawlings said.He urged Mr Mahama, the party leadership and all the grassroots “to work together to re-embrace the NDC’s core principles in a bid to carve a positive message and image for the party”.Meanwhile, Mr Rawlings’ daughter, Dr Zanetor Agyeman-Rawlings has also congratulated Mr Mahama on his election on Saturday, 23 February 2019.Mr Mahama beat his six other contestants with an overwhelming 95 per cent of the votes cast.In a congratulatory message, Dr Agyeman-Rawlings, who is the MP for Klottey Korle on the ticket of the NDC, said: “I wish to congratulate H.E. President John Dramani Mahama for his resounding victory at the presidential primaries of our great NDC party.“I also commend all the other candidates for helping to entrench the democratic process within our party.“Now it is time to work together for victory in the 2020 general elections. #TogetherWeBuild #Victory2020”. Following rumours last year that Mr Mahama intends settling on the first-time MP as his running mate should he win the flag bearer race, a senior political science lecturer at the Kwame Nkrumah University of Science and Technology (KNUST), Dr Kwesi Amakye, said the medical doctor-turned-politician will be a very good partner to the former president.Dr Amakye told Class91.3FM’s 12Live news programme on Monday, 19 November 2018 that Dr Zanetor “has what it takes to partner former president Mahama in 2020”.In his opinion, such a move will be “a strategic card to play”.Dr Amakye added that Dr Agyeman-Rawlings “will make a good choice”.He added that such a strategy will be “a tough card and a very powerful one”.Dr Amakye, therefore, wanted discussions to focus on “her competence and capacity” and related matters.“We need to acknowledge that the lady has what it takes,” he added, as he pointed out that a running mate role will bring added benefits to the NDC party.Dr Agyeman-Rawlings herself said late last year that she was “willing” to support the NDC, to win the 2020 general elections by serving in “whatever capacity”.Asked directly by Moro Awudu on Class91.3FM’s Executive Breakfast Show at the party’s 9th National Delegates Congress grounds if she were ready to partner Mr Mahama as his running mate into the 2020 polls should the former president win the flag bearer slot of the party, the Dr Agyeman-Rawlings said: “You’re asking a tricky question, which I mustn’t answer because I am not the one to decide who his running mate should be should he emerge as the flag bearer”.“So, I think to answer that question would be a bit premature”, she said.A few months prior, former president Mahama’s campaign team had described the Mahama-Zanetor running mate reports as false.A statement from Mr Mahama’s Campaign Office signed by spokesperson James Agyenim-Boateng on Wednesday, 7 October 2018, asked the public to disregard the speculations.“Former President John Dramani Mahama has become aware of speculations about his choice of Running Mate for the 2020 Presidential elections.“We wish to state that the reports are false.“Mr Mahama is presently focused on both his NDC flag bearer campaign and his official duties.“Therefore, Ghanaians should disregard all such conjectures”, the statement said.Source: Ghana/ClassFMonline.com