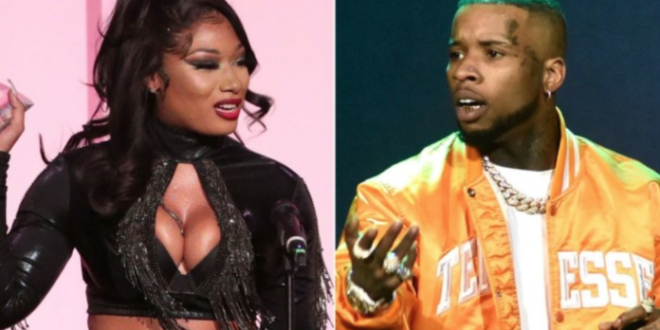 Rapper Tory Lanez has been charged with shooting fellow star Megan Thee Stallion during an argument earlier this year.

Lanez, 28, is accused of shooting the 25-year-old in both feet following a party in the Hollywood Hills in July.

He has been charged with assault with a semi-automatic firearm, carrying a loaded, unregistered firearm in a vehicle, and inflicting great bodily injury, Los Angeles District Attorney’s Office said.

His arraignment will take place on 13 October and prosecutors say he faces a maximum sentence of 22 years and eight months in prison if convicted.

Lanez, real name is Daystar Peterson, is thought to have been in an SUV with Megan, whose real name is Megan Pete, on 12 July.

The pair got into an argument after going to a party and as Megan went to leave the car, Lanez shot “several times” at her feet, prosecutors claim.

Megan spoke about the alleged incident in an Instagram video, saying she was “extremely grateful to be alive” and describing it as a “traumatic night”.

Previous Akufo-Addo’s ‘Year of Roads’ a scam – Drivers, as cars including ex-TOR MD’s get stuck on muddy stretch
Next I have been killed before my time even though I’m alive – Murdered MP’s mother cries