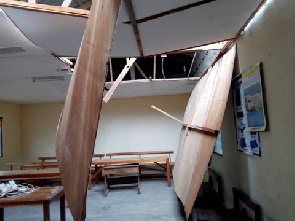 A heavy rainstorm Thursday evening wreaked havoc at the Okorase community in the Akuapem North Municipality of the Eastern Region.

Teaching and learning materials, exercise books and computers available in the affected school were soaked.

Also, some examination papers printed for upcoming end of term examination scheduled for next week were affected.

According to the headmistresses of the affected schools, urgent help is needed to help restore academic work which has been disrupted.

Rev. Sarbeng Appiah- Kubi, Minister in charge of Okorase Methodist Church told Kasapa News the Church is considering given out its uncompleted church building to temporarily accommodate the displaced pupils but was concerned with its suitability for academic work since it is not in good shape.

Many giant billboards along the Okorase to Koforidua township have been floored.

Reports indicate that the rainstorm was recorded in many parts of the region and may have caused problems elsewhere.