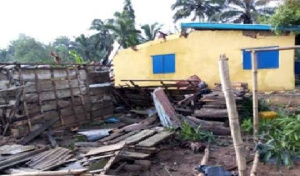 Madam Aminatu Dramani, a 97-year-old bedridden resident of Likpe Koforidua in the Oti Region is among scores affected by a heavy rainstorm that affected the community.

A visit to the community by the Ghana News Agency (GNA) saw affected residents salvaging their belongings and trying to rebuild the leftovers.

Madam Zeibenatu Dramani, a trader and daughter of the nonagenarian, who was almost in tears told GNA that her mother’s health deteriorated after the incident.

“Lucky for us, I was with her in the room when it was raining and I had no idea our roofs will be ripped up. All of a sudden, the roof went off and we were helpless in the room with our belongings being soaked by the rain.”

She said their belongings were not only soaked, but their kitchens also brought down to the ground.

“All we will be doing is to be washing daily while we hope to get help from authorities to come back on track.”

Mr Anthony Nyabiase, a farmer and a victim said he went to the farm and upon arrival, his building was without its roof.

He said he was trying to get mud available for masons to raise part of the collapsed walls.

Another victim, Madam Bashiru Rafira, whose walls also collapsed as the result of the incident said: “We left the bedroom to the hall for safety after the roofs were ripped up.”

She said the timely intervention of her spouse saved them from harm’s way.

Mr Tannor David, Mankrado of Likpe Koforidua, who spoke to the GNA on behalf of Nana Kofitse Samba V, Chief of Likpe Koforidua, said although there were no casualties, the rate of damage was unprecedented adding that some electrical connections were also affected.

He said some of the victims had a problem fixing their roof due to non-availability of wood.

The Mankrado called for a quick response from authorities and the National Disaster Management Organisation (NADMO) to enable residents to have a haven to return to normal duties.

For the likes of Reverend Alphonse Yebbi of the New Testament Ministry and a landlord who had the means, he had begun reroofing some affected rooms occupied by a teacher and some National Service Personnel.

Madam Florencia Anyangeh, a 96-year-old whose kitchen was not spared by the rainstorm, said the adequate and timely response was all that could save them.

Mr Kudjoe Julius Ceasar, Assemblyman for the Likpe Agbozome/Koforidua Electoral Area told the Ghana News Agency that the town which was established about 80 years had not experienced a rainstorm that had caused damage to that extent.

He said the influx of illegal chainsaw operators had led to sawing of trees that would serve as windbreaks for the community.

Mr Kudjoe said steps were being taken to report the unlawful activities to the appropriate authorities and follow-ups would be made.

He appealed to benevolent individuals, groups and organisations to support the affected community members.

The Hohoe NADMO officials had visited the community, and taken inventory of the affected victims and promised to get back to them.