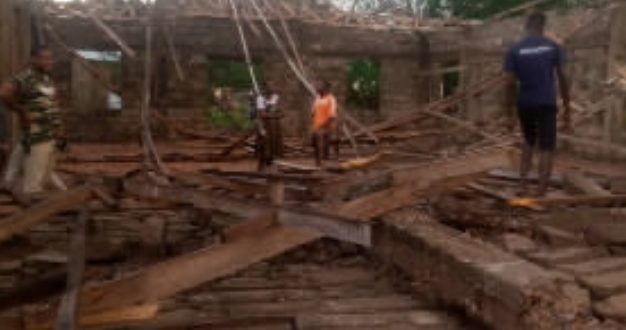 Share
About 18 houses have been destroyed by a rainstorm that hit Kodzobi Ando near Adaklu Kodzobi in the Adaklu district.

Some of the buildings collapsed, while the roofs of some were completely ripped up.

Others destroyed during the storm were lotto kiosks, provision and barbering shops, and hairdressing salons.

Mr. Carlos Atidoh, Deputy Director of Adaklu District National Disaster Management Organisation told the Ghana News Agency that about 30 people were displaced by the disaster and were putting up with friends and their relatives.

Mr. Atidoh advised the people to plant trees around the community to serve as a windbreak during such storm and appealed to them to always consult the works department of the Assembly for technical advice before putting up their houses.

Mr. Atidoh hinted that his outfit would liaise with their regional office to see how best to assist the victims.

Mr. Prosper Kumah, a youth leader in the community appealed to organisations and philanthropists to come to their aid.