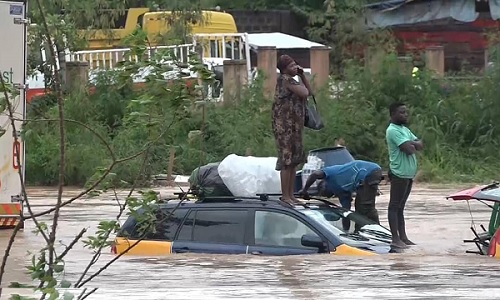 Hours of rains in parts of the Western Region have led to flooding in parts of the Ahanta West, Ellembelle and Prestea Huni-Valley municipalities, resulting in many houses being flattened and items destroyed.

In Ahanta West, for instance, the road linking the Sekondi-Takoradi metropolis and the Effia-Kwesimintsim municipality to Agona Nkwanta has been cut off.

The St Mary’s Boys’ Senior High School, the police station building, commercial buildings, private homes, as well as the road leading to the Fonko community, were all inundated with rainwater, disrupting activities in those places.

Over 200 households were affected at Akropong and Adubrim in the Ellembelle District, where the rains had started last Sunday, leading to the displacement of hundreds of people in the area.

Residents of Ankobra and Hemang in the Prestea/Huni Valley municipality were not spared the agony, as the Ankobra River overflowed its banks.

According to some of the victims, although the rains were not intense, hours of downpour in the adjoining region, Western North, made rainwater flow into the Ankobrah River, causing it to swell and spill over to nearby communities.

The District Chief Executive for Ellembelle, Kwasi Bonzo, said the rains started in the early hours of Sunday, and that about 800 people had lost their sources of livelihoods to the floods.

Speaking to the Daily Graphic after a tour of some of the affected communities, the Western Regional Minister, Kwabena Okyere Darko-Mensah, said his office was working with the National Disaster Management Organisation (NADMO) to clear the debris left by the floods to ensure the free flow of both vehicular and human traffic.

“The challenge we have currently is that the volume of water passing through communities and other affected areas is more than what it used to be. Some communities that have never experienced floods are now getting flooded,” he said.

According to the minister, a portion of the Apowa road that was cut off would temporarily be fixed, while efforts were made to find a permanent solution.

“The culvert along the stretch which was not able to contain the volume of water will be expanded,” he said.

The minister advised the people, including motorists, to be cautious in the period of the rains and let safety be their watch word.

“When you see rainwater taking over the roads, do not try to drive or walk through it, and if you are already in traffic, you can get a secure place to park and wait for the rains to subside,” he added.

Mr Darko-Mensah also urged people living at low-lying areas to relocate to higher ground until the situation got better.

A Divisional Chief of the Prestea Hemang Traditional Area, Nana Ntaboah Prah IV, appealed for support after personally presenting some relief items to the affected people.

Previous Lekma Warns Squatters Of Prosecution
Next 48-hour ultimatum on CSIR lands: Over 100 structures pulled down