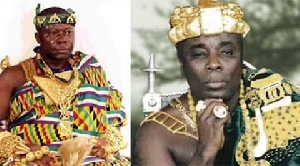 According to Prophet Salifu, the two prominent personalities in the country have had a renewal of anointing by God in the spiritual realm to endure the challenges in the new year.

Detailing his encounter, when he was taken on a tour with an angel in the spirit world, Prophet Salifu said contrary to what some others have prophesied, the two Akan kings have been blessed by God to live long.

“I saw an angel that flew from the east, this angel was so glorious I’ve never seen some before. The angel had many colours and seven eyes with three wings. Then the Lord told me to watch, there are two major kings I’ll grant them access to long life so I looked and that angel went all the way to sit on the Manyhia Palace,” he said.

He continued his narration; “The angel then descended into a room, then I saw Otumfuo sitting down. Then the angel covered him with the six wings and proclaimed; ‘I’ve loved you; I’ve made you the nation’s Solomon. I’ve given you long life and good health’ and the Lord said tell the King that he will not die.”

He added that the angel visited the Otumfuo with many precious minerals signifying wealth for the Ashanti Kingdom.

Touching on the revelation he had about Okyenhene, he said the same angel in a similar manner, descended to the Okyenhene’s Palace to bless him and grant him long life.

“…Then, I saw the angel enter the Okyenehene’s Kingdom and again covered the Okyehene Amoatia Ofori Panin with his wings. The lord asked me to tell the Okyenhene that he has a covenant with him and will see him through,” Prophet Salifu explained.

Prophet Salifu made these prophecies known while addressing his congregation on Sunday January 3, 2021.

Tags about AND OKYEHENE OTUMFUO PROPHECY