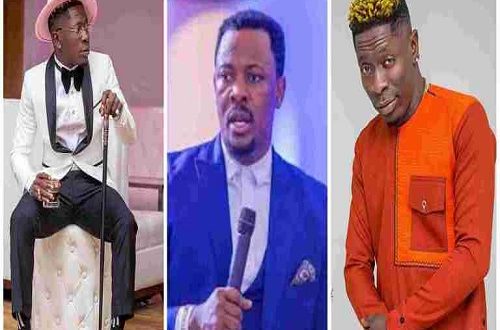 The Leader of Prophetic Hill Chapel, Worldwide Prophet Nigel Gaisie has disclosed what the mother of Shatta Wale did which has pushed the artist into an unexplainable wealth.

Shatta Wale’s astronomical rise to the top of Ghana music, especially on the premise that he was still wallowing in the doldrums when he was called Bandana continues to surprise a lot of people.

The prophet has debunked rumors that the source of wealth of Charles Nii Armah Mensah popularly known as Shatta Wale is through “juju” means.

However, he disclosed that his mother is the main reason why her son is wealthy.

Prophet Nigel Gaisie made this revelation during an interview on Kofi TV when he was asked to choose between Shatta Wale and Stonbwoy.

Nigel chose Stonebwoy on grounds that he has a personal relationship with him nut admitted that both artists are good.

“Shatta Wale is a clean guy. Those times when he used to pray in the mornings and evenings some years ago when he was still Bandana from Ghana. His mother who was a God-fearing woman attended church programs with the photo of Shatta Wale in her hands asking for prayers for him. Shatta Wale is rich because of his mother,” Nigel Gaisie told Kofi Adomah Nwanwani during the interview.

Previous PHOTOS: 3 Fear Dead In A Ghastly Accident In Takoradi
Next I am taking the EC to court– Nana Agyenim Boateng