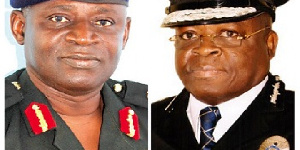 The Ghana Armed Force and the Ghana Police Service are alternative plans with respect to their mortuary facilities in this period of the deadly Coronavirus, although the country per official reports is said to have recorded just 9 deaths compared to others who have records thousands.

While the Ghana Police Hospital has announced a mass burial of unclaimed and unidentified bodies within the next two weeks in a move to decongest its morgue, the Ghana Armed Forces has installed mobile mortuaries at the El-Wak sports stadium in Accra in the wake of increasing COVID-19 infections in the country.

The arrangements by the two institutions come as the Mortuary Workers Association has also raised concerns that their facilities are getting full as families refuse to bury their relatives dispute President Akufo-Addo asking families to bury their deceased relatives but with a gathering of 25 members.

What this means is that family who have lost their loved one before the outbreak the COVID-19 are not burying. People who died after the ban on all social gatherings are not being buried either.

A statement issued by the Head of Public Affairs of the Hospital, DSP Yaw Nketia-Yeboah, on Friday, April 17, 2020, has therefore called on families to get in touch with the hospital for arrangements to have bodies released to them.

According to the statement, though there is a ban on funerals, families who sign an undertaking to comply with existing protocols of organizing private burials are permitted to come for bodies.

“Such gathering should not be more than twenty-five (25) people assembling and must also respect the existing protocol including the social distancing.” It added: “Such bodies are only to be taken in a casket and buried without any delays.”

The hospital usually organizes periodic mass burial of unclaimed and unidentified bodies. But before this, it serves notice to the public. In this particular case, the public has been given two weeks to identify and claim bodies.

In the case, the Ghana Armed Forces, picture of some soldiers installing the mobile mortuaries at the El-Wak sports stadium in Accra have gone viral.

The easy to fix and dismantle facilities are the first of its kind in the country in the wake of increasing COVID-19 infections in the country. It comes as President Akufo-Addo in the earlier days of the COVID-19 outbreak in the country banned all social gathering including funerals.

Although the President directed private burials with a limited number of 25 family members present, most families are not adhering to the directive to still hold private burials.

The feeling is that most families are waiting for the pandemic to end so that they can give their deceased loved ones befitting burial. At the Ministry of Information Press Briefing this week, the Minister, Kojo Oppong Nkrumah, explained that these mobile mortuaries were installed to complement a temporary clinic the Ghana Armed Forces military has built at the El-Wak stadium as part of the fight against COVID-19 pandemic.

The facility will serve as temporary preservation measure whiles the authorities put together arrangements for the mass burial of dead COVID-19 patients. The facility is expected to ease the pressure on the major hospitals and mortuaries in Accra in the event of a surge in COVID-19 related deaths in the country.

The Information Minister, reiterated the President’s directive that families across the country who are not residents of the lockdown areas can still hold their private funerals with not less than 25 persons.

Minister said: “Private funerals across the country fit into the earlier executive instrument where it happens that not less than 25 persons can hold a funeral but for Accra and Kumasi because of the lockdown it does not apply unless the lockdown is lifted.”

Meanwhile, a community health advocate, Samuel Arthur called on President Akufo-Addo to issue specific directives to families who have kept remains of their relatives in morgues for a long time to bury them to free up space.