The President of the Republic, Nana Addo Dankwa Akufo-Addo, says a strategic partnership between Ghana and South Africa is of the utmost importance, as it will empower the business communities of the two countries, as well as enhance the trade and investment relations between them. 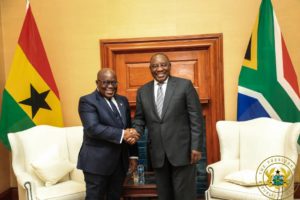 With West Africa and Africa’s populations set to reach some 500 million and 2 billion, respectively, in 20 years, President Akufo-Addo noted that genuine regional and continental markets in Africa should be in the mutual interests of South Africa, the number one economy on the continent, and Ghana, the gateway to the markets of West Africa. 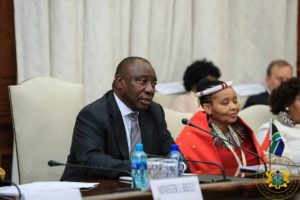 “These markets will present immense opportunities to bring prosperity to our peoples with hard work, creativity and enterprise,” the President said, adding that “my visit here is a signal of how much we welcome such a partnership,” he said. 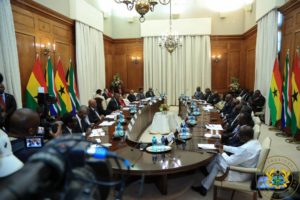 President Akufo-Addo made this known on Thursday, 5th July, 2018, when he spoke at the Ghana-South Africa Business Forum, held in Pretoria, as part of his State Visit of South Africa, the first State visit paid by a President to South Africa under the presidency of President Cyril Ramaphosa. 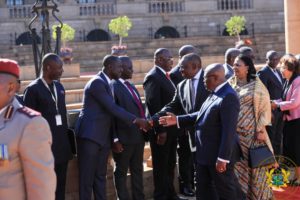 Touching on the theme for the summit, “Advancing Industrialization through trade and investment”, President Akufo-Addo noted that future economy of Africa cannot be the raw material producing and exporting economy of the past, and must be based on value-addition and industrial activities. 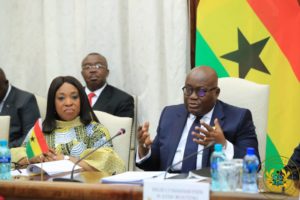 The role of the private sector, to this end, the President noted, is crucial. That is why over the past 17 months in office, his administration has set about putting in place the measures needed to reduce the cost of doing business and improve the business environment.

This, he stressed, has resulted in the growing stability of the country’s macroeconomy and the cedi, single-digit inflation, and an abolition of nuisance taxes whose aim is to shift the focus of the economy from taxation to production.

Additionally, the President noted that his government has implemented specific measures such as the introduction of an e-business registration system, a  paperless port clearance system, a digital addressing system, a mobile interoperability system, and a national identification card system, to formalise the Ghanaian economy, reduce the cost of doing business, and facilitate interaction between businesses and clients.

“I am, thus, notifying the business community in the South Africa, to take advantage of the growing business-friendly climate in the country, to invest in Ghana.

Our flagship policies of “One District, One Factory”, “One Village, One Dam”, and the “Programme for Planting for Food and Jobs” describe areas of opportunity, which I commend to you, as I do areas in the development of renewable energy and ICT growth,” he said.

To facilitate and expedite South African investments in our economy, President Akufo-Addo told the South African business community that the Ghana Investment Promotion Centre (GIPC) has established a dedicated South African desk at the Centre.

On the country’s infrastructural deficit, he was hopeful that with solid private sector participation, “we can develop a modern railway network with strong production centre linkages and with the potential to connect us to our neighbours to the north, i.e. Burkina Faso, to the west, i.e. Cote d’Ivoire, and to the east, i.e. Togo.

We believe that this is an area where South Africa technology and expertise would be very welcome.”

The President continued, “There are several projects in roads, water transport, industry, manufacturing, agriculture, petroleum and gas, renewable energy, the exploitation of our mineral wealth of bauxite, iron ore and gold, and the ICT sector, amongst others, which are being structured to attract private sector financing.”

He assured South African business leaders that Ghana is a haven of peace, security and stability, a country where the principles of democratic accountability are now firmly entrenched in its body politic, and where the separation of powers is real in promoting accountable governance under the rule of law.

“We are keen on attracting foreign direct investments to exploit our country’s great potential on mutually satisfactory terms.

Investments are protected in fact and in law,” he said. President Akufo-Addo was expectant that the Ghana-South Africa Business Forum will help facilitate partnerships between Ghanaian and South African companies, and create the common platform that generates ideas and nurtures them into success.

“It is my hope that exchanges of this sort will enable the strong relations between Ghana and South Africa to grow even stronger,” he concluded.

Ace Sports journalist, Kwabena Yeboah was reduced to tears on live TV before the Black …