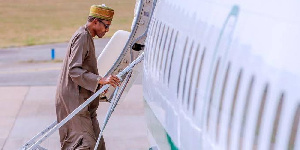 The Presidency has confirmed the SaharaReporters’ exclusive report that President Muhammadu Buhari who recently travelled to Seoul, South Korea on a five-day official visit will also be going to London, UK where he will be seeing his doctors.

A source had told SaharaReporters, “President Muhammadu Buhari is scheduled to depart Abuja for Seoul, South Korea on a 5-day official visit to the Asian country.

“The President who wanted to visit Doha, Qatar last month but was snubbed by the Qatari leader is poised to go on a merry-go-round around the world between now and his eagerly awaited exit from power in about 7 months.

“From Seoul, Buhari will proceed to London where he is scheduled to undergo a medical procedure at the Royal Brompton Hospital situated at Sydney St, London SW3 6NP, between November 1 and 2, 2022.”

Confirming the report on Monday, the Special Assistant to President Buhari on Media and Publicity, Femi Adesina, on his Twitter account said the President would be back in Nigeria in the second week of November.

This is despite the rising tension and fear in the country, especially in Abuja over the terror alert by the US, UK and Canadian commissions.