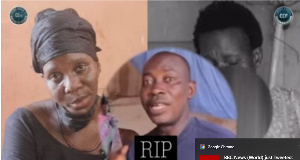 “He called to tell me he had been paid his salary so he would be going to the hospital for treatment but he did not come back home again.” That is how the wife of a watchman, Esi Amoo announced her husband’s death.

According to Esi her spouse, Edmund Amoo had complained to her of heartache and needed to seek medical attention but he did not have money.

Esi said Edmund went to work despite his condition in the hopes of going to the hospital when he is paid his salary. It was however too late because before his pay arrived, death had taking lead to take his soul away as he did not return home alive that day.

“He collapsed on his way home and died instantly,” Esi told crimecheckghana.org.

Living in a wooden kiosk with their four children, the couple has been living on a hand-to-mouth basis barely affording three square meals.

It will be recalled that two years ago, Crime Check Foundation (CCF) supported Esi to undergo two series of surgery to remove a huge tongue tumor.

Edmund, at the time, could not raise Four Thousand Ghana cedis to enable his wife to undergo the treatment.

CCF, through two of its group donors, the California Classic Ladies based in California and Friends of Wool Wich in the UK gave Esi One Thousand Five Hundred Ghana cedis to make a deposit at the hospital.

The Foundation eventually paid off the bills, which saw Esi undergo the knife to remove the tumor.

Edmund who was overwhelmed could be seen on his knees thanking CCF and the donors. “You are my God on earth. God bless you,” he said.

Esi’s tumor is developing again because she could not complete her surgeries but the financial difficulty is denying her from seeking medical treatment.

Edmund, whom Esi described as her only hope has left her to fight the battles ahead alone as the family has ignored her even in these more painful times.

The widow appealed to the public to come to her aid. “I am pleading with you to support me to get medical care and also cater for the children,” she begged.

Meanwhile, Crime Check Foundation has given her an amount of Two Thousand Ghana cedis from a donor based in Germany, Ewe Union to enable her to start a business.