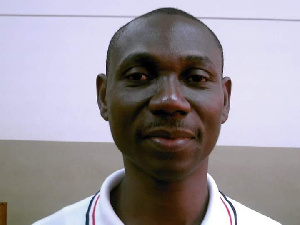 MyNewsGh.com has intercepted further details over the suicide of a Deputy Superintendent of Police (DSP) early this morning at around 7:45am at Adjei Kojo a suburb of Tema, revealing his full name as DSP Devine Assiam.

Official sources at Adjei-Kojo District Police station indicated that the late DSP Devine Asiam was with the Tema Courts Unit at Borteyman and shot himself after writing a note which was found beside him along with the pistol suspected to have been used in the suicide.

When officers were dispatched to the scene of the alleged suicide, they found him with a gunshot wound around his left eye and under his chin which they suspected to be self-inflicted. He was bleeding profusely but was still alive when they found him.

The wounds suggested he shot himself under his chin and the bullet exited through the top of his left eye without killing him instantly.

DSP Devine Assiam was quickly rushed to the Police Hospital for medical attention where he was admitted but died shortly after.

Police investigators returned to his room where the incident happened and retrieved what MyNewsGh.com’s source said was a Pietro Berretta pistol smeared with blood on the floor.

Four unused live rounds of ammunition were found in its magazine.

His suicide note which is dated 14th February, 2021 was written at 1.30am before he shot himself at around 7 in the morning.

MyNewsGh.com is unable to publish the full details of the suicide note.

Police have retrieved all the exhibits and are being kept for evidence purposes.

This suicide comes barely a fortnight after the Police Commander for Jomoro in the Western Region of Ghana Superintendent McCarthy Zeng allegedly killed himself in a similar fashion.

According to reports, Superintendent McCarthy Zenge wrote in the suicide note that “I am fed up in this world”.

It’s unclear why he was fed up with life and had to commit suicide but Public Relations Officer of the Western Regional Police Command, Deputy Superintendent of Police (DSP) Olivia Adiku, confirmed his death but indicated that she will divulge further information after investigations have taken place.