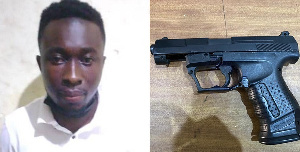 •The Police has arrested an aide of Rev Owusu Bempah

• A weapon has been retrieved from the suspect

The Ghana Police Service has retrieved a weapon from Bright Berchie, a suspected aide to Reverend Isaac Owusu Bempah, who is in police custody.

The police revealed that the suspect who has been on the run for weeks was captured in a video “brandishing a weapon and issuing threats of death to the police officers and other persons” has been arrested.

According to the statement sighted by GhanaWeb, the suspect will soon be arraigned before the court as police continue with investigations into the case.

The Founder and Leader of Glorious Word and Power Ministry International, Reverend Isaac Owusu Bempah was arrested together with three of his junior pastors on Sunday, September 12, 2021.

The arrest of Owusu Bempah came after a series of confrontations between him and repented fetish priestess, Nana Agradaa now known as Evangelist Patricia Oduro Koranteng.

A day after some junior pastors of Reverend Owusu Bempah were seen in a viral video brandishing guns and threatening to deal with Agradaa, the pastor and a group of men trooped to her residence to confront her.

Agradaa however failed to face up to Owusu Bempah but chose to stand on the balcony of her building leaving the pastor and his troop stranded at her gate.

Following the incident and the brandishing of weapons that characterized the storming of Agradaa’s residence, the Ghana Police Service picked up the Reverend Owusu Bempah and his junior pastors and put them before a court on Monday.

His plea for bail was rejected by the court which handed him a one-week remand.

He was however granted bail on Wednesday, September 15, 2021.

Previous Asante Kotoko board reportedly against sacking of Emmanuel Gyamfi
Next Can the US avoid another government shutdown?