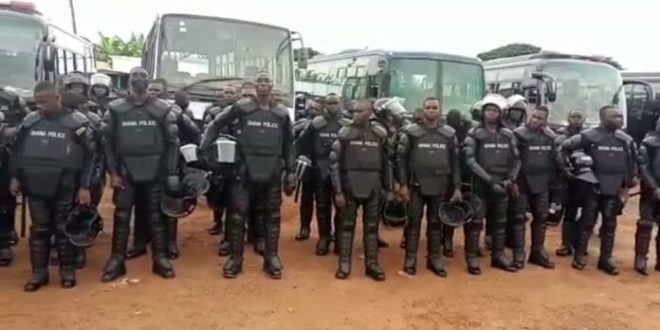 Hundreds of police personnel led by the Deputy Eastern Regional Police Commander DCOP Emmanuel Twumasi-Ankrah have been deployed to Lower Manya Krobo Municipality in the Eastern Region as some divisional chiefs lead demonstration against installation of prepaid meters and deployment of soldiers for same.

The demonstration being participated by thousands of residents will start from Akutunya and end in Kpong.

The demonstration is part of series of demonstrations and protests held against ECG in the ongoing Prepaid meter installation exercise.

The Police personnel dressed in riot gears with riot control equipment and vehicles are expected to provide adequate security and protect lives and properties.

Last week for instance, tension escalated at Nuaso a suburb of Odumase Krobo when some agitating residents who spontaneously protested had confrontation with the armed military for supervising installation of prepaid meters without engaging the community.

The volatile atmosphere forced the military and the staff of Electricity Company of Ghana to retreat from the area.

However, the ECG team and the military returned in the afternoon to continue the exercise.

Neighboring residents from Kpongunor who have also embarked on similar protest mobilized and stormed Nuaso to support the people resist the military and ECG officials.

The military and the ECG team sensing violent confrontation again retreated having engaged the chiefs and Assembly members in the area for community engagement to be done on the exercise Tuesday before they resume.

Assembly member for Nuaso Raymond Newton said the residents need education on the prepaid meters therefore hopeful that the community engagement agreed upon with ECG tomorrow will deescalate tension in the community.

The directive was given by the Second Deputy Speaker, Andrew Amoako Asiamah, on Friday, June 24 after the Member of Parliament for the area, Ebenezer Okletey Terlabi raised the matter on the floor of the house , indicating that the presence of the military men is heightening tensions in the community.

“We are also directing that the Minister for Defence withdraws the military attaché in the area for the time being for us to address certain matters, I so direct.” the second deputy speaker directed.

About 50 military personnel have been deployed to Krobo area to provide security to staff of Electricity company of Ghana ,ECG, as it replaces all postpaid meters with prepaid meters since June 14,2022

However, according to Sakyiwaa Mensah, Public Relations Officer for , ECG, Tema Region the military are providing technical support since they are undergoing refresher training course at ECG training school.