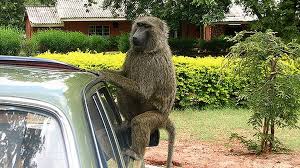 Police in Anambra state have arrested a baboo for assaulting and leaving a 13-year-old girl hospitalised.

The girl is said to have been wailing in pain when the baboon escaped from its cage and attacked her.

The baboon is owned by one Mrs Flora Ilonzo of Agu-Awka who lives in the same compound with the victim and her family.

It took the arrest of the baboon by the State Police command to free the victim from it’s grips.

Owner of the baboon wrote a statement on behalf of her pet before it was granted self-recognition bail.

The police spokesperson added that the animal was recaptured and taken to a more secured cage while the victim was transported to the hospital.

Previous Another Senior Police Officer commits suicide; shoots himself dead
Next Vals Day: How your favourite female celebrities are serving it hot with their outfits [PHOTOS]