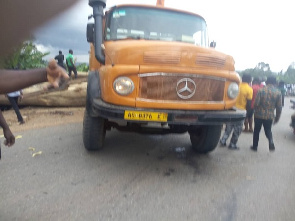 Police in the Eastern Region have arrested a suspected driver for causing the death for an 8-year-old boy at Asamankese.

The driver was driving a Benz truck with registration number AS 8376 – E loaded with 3 timber logs and was traveling from Asamankese towards Pabi on the Suhum Asamankese road when the incident happened.

The driver while climbing a hill, at a section of the road opposite the Dutch Preparatory school, lost control of the wheel and the logs fell off the truck killing the young boy instantly.

Confirming the incident to Citi News the Eastern Regional Police Public Relations Officer, DSP Ebenezer Tetteh said the remains of the young boy has been deposited at the Asamankese Hospital.

“On March 1st at about 2 pm a driver who was incharge of Mercedes Benz truck with registration number on AS- 8376- E was on his way to Pabi from Asamankese. He had 3 timber logs on his truck and when he got to Yayo a section of the road on the Suhum Asamankese stretch, the engine of his truck went off when he attempted climbing a hill”.

“In the process he lost control of the wheels making the logs fall of the truck which accidentally ended up trapping an 8-year-old boy who was selling on the shoulders of the road. The body of the boy has been removed and deposited at the Asamankese government hospital for autopsy”.

DSP Ebenezer Tetteh added that “the driver whose name is yet to be identified is in our custody assisting us with investigations. I will use this opportunity to caution the general public not to allow kids sell on or between roads. This is very unfortunate and disturbing I know it won’t be easy for the family but please I want us to heed to this advice going forward”.