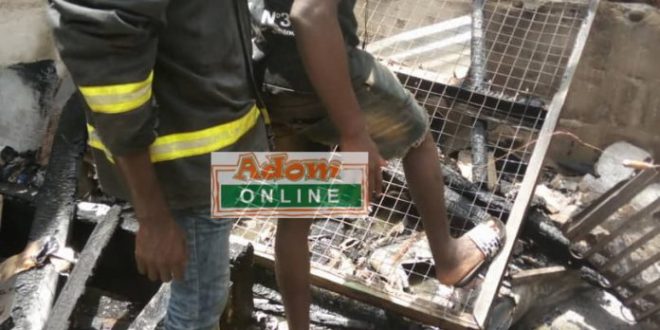 A farmer at Assin Atobease in the South Assin District of the Central region, Mr Kwame Mensah has been rendered homeless after fire razed down his chamber-and-hall apartment on Wednesday when he had left for farm.

In an interview with Adom News, Mr Mensah, who revealed he lost everything to the fire, attributed the cause of the fire to a power outage that occurred Wednesday morning.

“I switched off all sockets and appliances before I went to farm this morning but I had a telephone call from relatives that immediately the power was restored by Power Distribution Service, there was a fire outbreak in my house and I had to rush home but to see ashes,” he narrated.

According to witnesses, despite the intervention of the Abura Dunkwa Fire Service personnel and neighbours, the household got burnt completely.

Meanwhile, the Assin South Senior Disaster Control Officer, Mr Kingsford Amoah, who also spoke to Adom News, stated that their assessment after the fire outbreak revealed it was caused by power outage.

Mr Mensah is calling on the National Disaster Management Organisation and individual philanthropists to come to his aid.

He is believed to have lost everything to the fire except the attire he wore to the farm. Property destroyed included two fridges, furniture, television, mattress, bed, personal belongings and an amount of GH¢500.00.